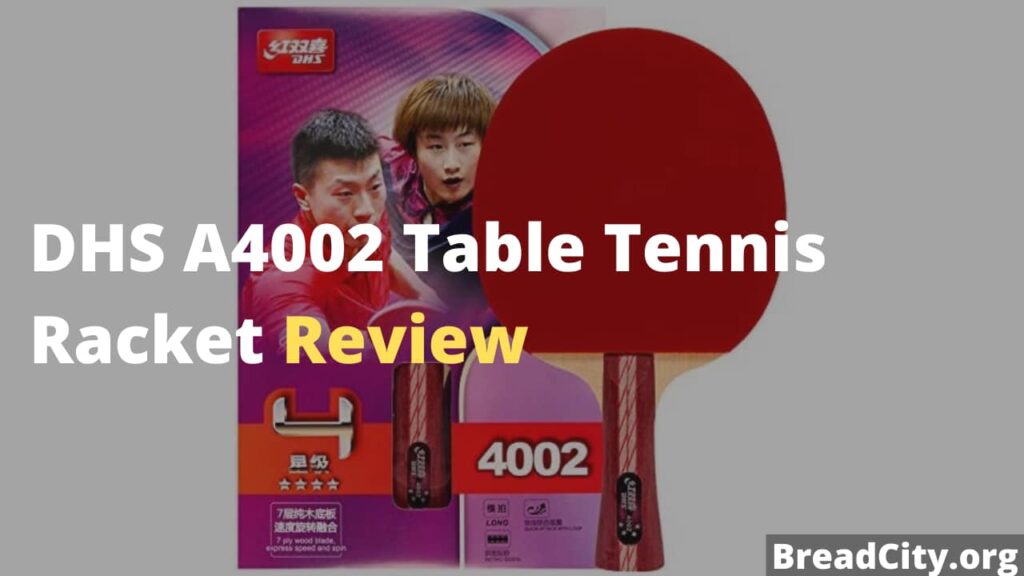 Are you ready to hop on your tale tennis journey with a great TT paddle? Do you want an affordable racket with all the qualities that will help you excel as a beginner? The DHS A4002 Table Tennis Racket could help you achieve that.

The rubber (G888 and Hurricane III) is of excellent quality. I can generate a lot of spins and carry a lot of speed with my shots while still maintaining control. I put so much spin on my serves that it’s absurd. 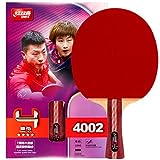 The wood is heavier than other paddles, but not to the point of being problematic, and the rubber is really sticky to the touch and provides a lot of ball feel. Yes, it is a bit heavier than a rather entry-level and light-weight STIGA Striker Table Tennis Paddle, but it is still great to play.

Additionally, the weight absolutely helps you smash the ball and the combination of sponge and weight truly helps to produce really good returns. It is the best option for improving your game while also keeping your budget intact.

DHS (Double Happiness) is China’s leading table tennis manufacturer and one of the country’s largest sporting goods suppliers. The company, which was established in 1959, is well-known and respected in the world of table tennis.

The wood and rubber level are of exceptional quality. The handle has a shakehand grip and is long and flared. The blade is a 7-ply wood front blade. On one side, the red hurricane (3 pimples) out are used, while the black G888 (pimples in) were employed on the other.

The rubber color could vary for the rubbers or may be switched sometimes, but the quality and performance are still absolutely up to the mark and expectations. The light 7-ply pure wood blade features a durable wood body.

AThe A4002 racket comes with increased power, speed, and spin because of the updated rubber allocations. It is claimed s Suitable for competitions or tournaments since it is the cheapest ITTF approved paddle in the market.

Even though it is recommended for advanced or professional players by the brand, I would only recommend it to beginners who want a great paddle to start with.

The DHS A4002 has a 7-ply pure wood blade, which contributes to the DHS guarantee of speed and spin. The paddle is roughly 200 grams in weight, which is a little heavier than typical beginner-intermediate paddles.

However, this weight is a benefit because it increases the speed and spin of the ball when smashed. When you’re a beginner, though, you’ll want to opt for a bat with a good control rating rather than one with a high-speed rating.

So, if you’re just getting started, this paddle may be challenging to handle at first. The player may need some time to get used to the racket’s weight and feel.

Furthermore, the weight simply aids in smashing the ball, and the combination of sponge and weight aids in producing excellent returns. 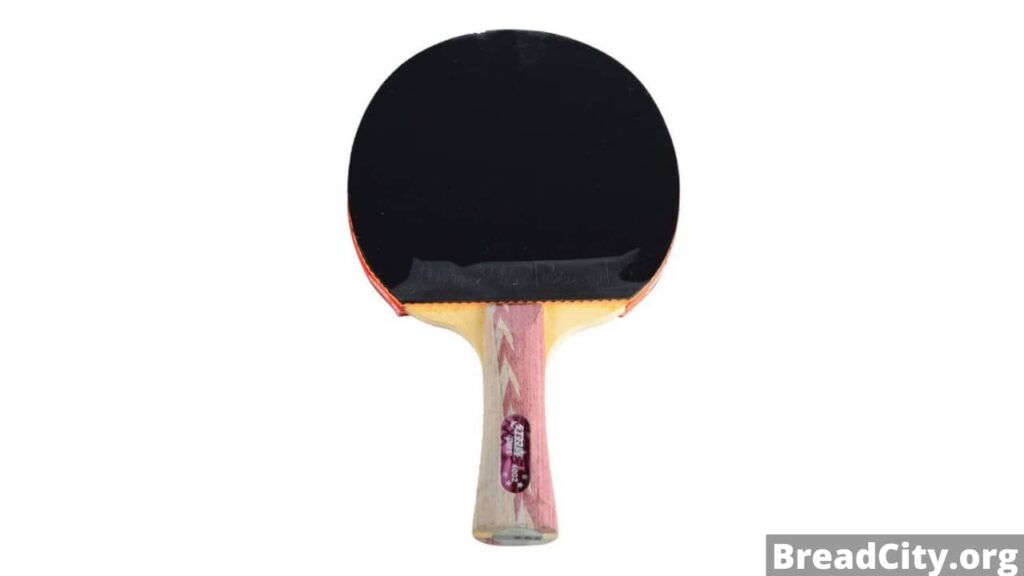 A red Hurricane III rubber is fastened to the blade, which I spotted when I used it. According to several websites, the paddle would come with Hurricane 3 rubber, however, I received Hurricane 2.

This basically indicates the recent upgrade that DHS has opted to implement, as well as the fact that it is stated in the product descriptions. The ITTF-approved DHS Hurricane 2 and DHS G888 rubbers are featured on the racket.

These are good table tennis rubbers that can be purchased separately. They’re both Chinese rubbers that are quite hard and tacky. Fast topspin is great, but blocking and control are not quite as good.

Many of the top Chinese players use the Hurricane line of rubbers. G888 isn’t the greatest rubber available, but it does what it claims.

The rubbers are extremely sticky and tacky to the touch, giving the ball a lot of feels. These two rubbers are quite popular on their own and are quite hard, allowing for a good spin with some control loss.

You should get a racket with rubber pimples on both sides. With no doubt, one of the best table tennis paddles for shakehand players is the A4002; however, for pen hold players, the DHS A4006 Table Tennis Table is highly recommended.

This table tennis racket has a shakehand style and a long handle. If you try to play an offensive slope, you’ll see that the shot and loop are both incredibly swift. It will undoubtedly aid any player who uses this racket in increasing their strength and smashing powers.

To match the good rubbers, the 7 ply hardwood blade is not of very high quality. It suggests the rubbers on this racket are superb, but the blade is inexpensive. This racket, in my opinion, is let down by the 4-Star blade.

Some customers have also complained about a fishy odor originating from the fish glue used to adhere to the rubber or from the wooden blade itself. It may be necessary to clean it after each usage until the odor goes away.

The paddle’s only major drawback is that it will collect dust and fibers over time and will need to be cleaned on a regular basis; you’ll also want to purchase a case or something to store it in.

What kind of fish smell do these paddles emit? Mercury is a source of concern for me. Is it Chinese tuna?

The odor does not come from a fish. It has a fishy odor that comes from the materials or adhesive used in the paddles’ manufacturing. It is mostly the smell of glue or sometimes from the blade itself.

It appears just when you first open the package. After the first game, I don’t recall smelling anything. If you’re worried, open the package and leave the paddles in a well-ventilated place for a few hours before using them.

How long do you think this paddle will last?

It is not the most sturdy or durable table tennis paddle that I have come across until now, but It could last for a long time if taken care of.  You could wipe it after every game and store it in a case. The rubbers are quite durable and long-lasting but the wooden blade is of low quality.

Would I Recommend DHS A4002 Table Tennis Racket?

Due to the obvious tackiness of the bat, I would definitely recommend it because it may provide you with a lot of spin and speed. It’s perfect for players who attack consistently and for shakehand players.

However, you should be aware that the blade is not particularly durable, and the overall quality may disappoint intermediate and advanced table tennis players.

The sponge on the rubbers is softer, which aids control and feel when learning new strokes. On the backhand side, this is extremely useful.

The DHS A4002 is one of the most recent additions to DHS’s wide range of equipment. It’s a Shakehand-style Ping Pong paddle that’s inexpensive and simple to use for beginners.

If you aren’t planning on using it in professional Ping Pong matches, it is the best value table tennis paddle. It’s extremely fairly priced, so you won’t break the bank here, but it’s still of reasonable value.

While the paddle is just a little heavy, it has superb control and spin, which is exactly what a beginner player learning to play should have. But then again if you want a paddle with more control, your best bet is the Eastfield Allround Table Tennis Paddle.

If you can not get your hands on or afford the Allround racket, the Palio Expert 3 Table Tennis Racket is your next best bet, which will provide you with the control you need as a beginner.